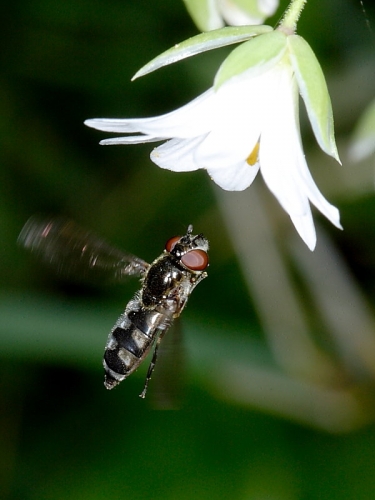 Last week, the sun certainly brought the hoverflies out along a sheltered hedgerow bordering the South West Coast Path beside the Helford River in Cornwall.

I was trying, and failing miserably, to take a photograph of a very unco-operative Speckled Wood (Pararge aegeria) butterfly when I noticed this Platycheirus albimanus feeding at Greater Stitchwort (Stellaria holostea). Strangely for a hoverfly its predictable flight pattern over one cluster of Greater Stitchwort suggested it may prove to be a more amenable model than the butterfly.

Insight: There are over 250 British hoverflies many of which are probably under-recorded due to their small size and the difficulty of identifying them in the field. Many are brightly coloured and, as their name suggests, have the ability to hover in the air.

The structure of the veins in its wing, showing a false margin and false vein, can confirm whether an insect is a hoverfly.

Platycheirus albimanus is a common species found on the wing in the early spring through to late autumn. As with so many insects, weather determines how active they are and greatly influences population trends.