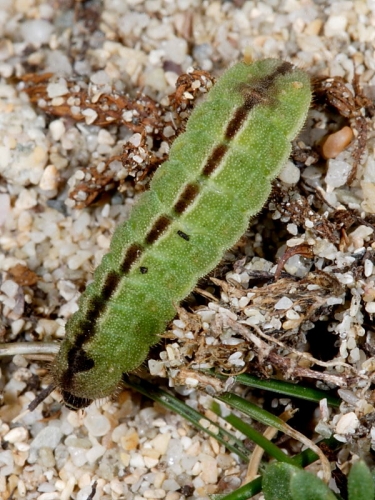 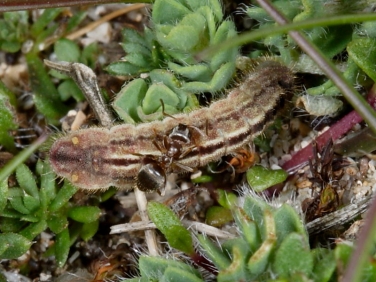 Groping around on hands and knees searching for caterpillars is one of those activities that at the time feels perfectly normal behaviour to those taking part but not necessarily to any other member of the public out for a quite stroll with their dog!

During our search for Silver-studded Blue butterfly caterpillars in the sand dune systems at Penhale on the North Cornwall coast our antics certainly created alot of interest. Fortunately our search was successful, finding both the brown and green caterpillar forms of this beautiful blue butterly. As always, ants, which play a crucial role in the life-cycle of this butterfly, were in close attendance.

Insight into Silver-studded Blue (Plebejus argus) butterfly: This species has an extremely localised distribution mainly in the south of England but with small populations in North Wales and the far east of the country.

It can be found in sparsely vegetated heathland, some chalk grassland and in Cornwall may also be found in some of the extensive sand dune systems on the north coast. It has a fascinating life-cycle with the caterpillars always closely attended by ants which feed on sugary secretions from its body and protect the pupae and the recently emerged butterlfies.

The larval foodplant is Common Bird’s-foot-trefoil (Lotus corniculatus) in the dune systems and Bell Heather (Erica cinerea) on the heaths. There has been some debate as to whether the coastal dune populations are a brighter colour than those found on inland heathlands without any conclusive evidence for this being established.