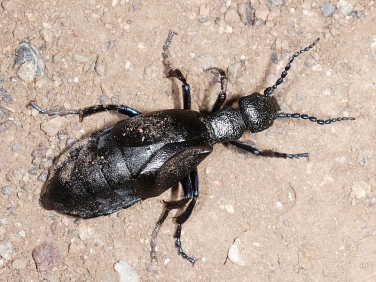 The south west is a stronghold for oil beetles which may be seen walking across paths and bare ground at this time of year. These large black beetles are flightless and slow moving so are easily spotted.

There are four species of British oil beetle and we came across this one, the Black Oil Beetle (Meloe proscarabaeus), on the South West Coast Path at Kynance Cove on The Lizard. This beetle and the Violet Oil Beetle (Meloe violaceus) are the most common of the four found in the UK but a close look at the shape of their thorax (the middle section of the body behind the head) is necessary to distinguish between them.

A national survey is presently being carried out by Bug Life to assess populations in response to concerns that oil beetle numbers are in sharp decline.

Insight: The number of oil beetles in the UK has halved during the last century and only recently one of the surving quartet, the Short-necked Oil Beetle (Meloe brevicollis), was rediscovered on National Trust land in south Devon.

Oil beetles get their name from the oily fluid they excrete when threatened.

The females are larger than the males and lay as many as 1,000 eggs in a hole in the ground. The life-cycle of oil beetles is intricately linked with that of bees. The beetle larvae wait on flowers and then attach themselves to pollen-collecting bees which then inadvertantly transport the larvae to their nests where they feed on the the bees eggs and food. Over the winter the larvae develop and emerge in the spring as adult oil beetles.

The fourth of the species found in the UK is the Rugged Oil Beetle (Meloe rugosus).