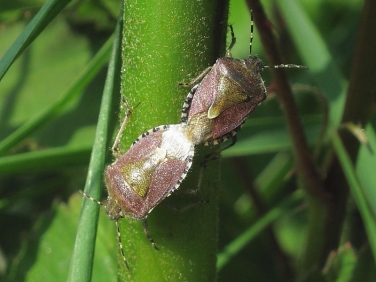 Several Sloe Bug, a type of shieldbug, were seen in a hedgerow near Rosemullion Head by the Helford River in Cornwall. These were mating whilst another appeared incredibly busy but seemed to lack any purposeful strategy – see the “Sloe Bug Shuffle” video below.

Insight into Sloe Bug (Dolycoris baccarum): Common throughout much of the UK but less so in northern regions. The adults can be seen in most months of the year and the purplish brown wings of the adult make them easy to identify from other shieldbugs.

Sloes are the blue-black fruit of Blackthorn (Prunus spinosa) and, as this insect’s name suggests, it is often found in hedges containing this plant. However, the larvae can be found feeding on a wide variety of plants particularly of the Rose (Roasaceae) family between July and September.