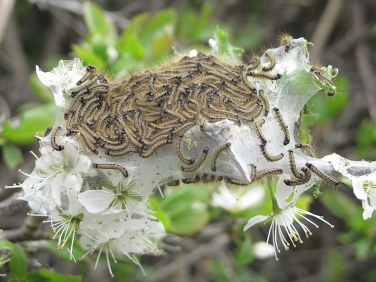 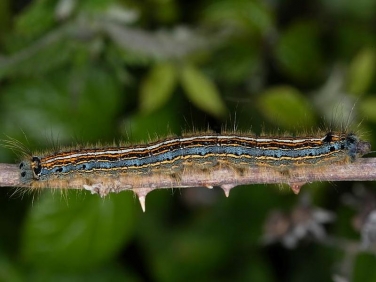 At this time of year silken webs containing sometimes hundreds of The Lackey moth caterpillars can be seen in the hedgerows. Here in Cornwall The Lackey moth seem to favour Blackthorn hedges in which to lay eggs but the webs can be also be found on lots of other small trees and plants.

The Lackey, Malacosoma neustria is a common species in the southern half of the UK.

The caterpillars hatch in the spring from over-wintered eggs and spin a silken web on a variety of foodplants such as Hawthorn (Crataegus monogyna), Blackthorn (Prunus spinosa) and Bramble (Rubus fruticosus agg.).

When small they live as a community inside the web where they grow rapidly before dispersing to find sheltered places to pupate. The adults fly later in the summer, in July and August.