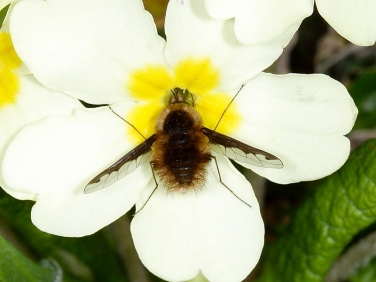 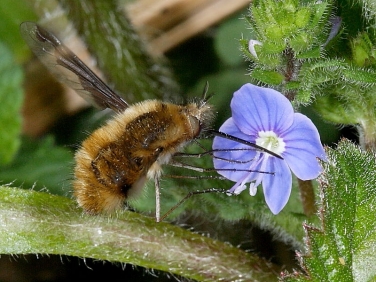 It’s amost certainly a Bee Fly that have been on the wing since the middle of March. The fine early spring weather saw lots of Bee Fly out early feeding at wild flowers such as Primrose (Primula vulgaris).

A flash was used to freeze the photograph of the Bee Fly on the Primrose (above left) in order to show the clear trailing edges of the wings which identify it as Bombylius major and not the rarer Bombylius discolor species which, as its name suggests, has black blotches on the wings.

Insight into Bee Fly (Bombylius major): This fly is common throughout most of the UK being absent only in the far north of Scotland. It feeds at a variety of wild flowers by hovering and using a long proboscis to penetrate deep into the flower heads.

Its larvae live in the nests of mining bees feeding on the bee larvae.