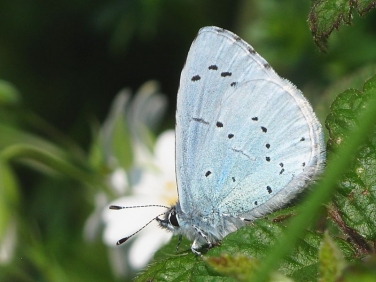 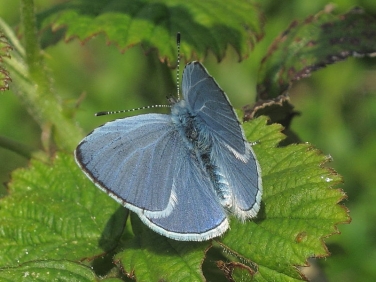 If it’s early spring then it’s almost certainly a Holly Blue. The first blue butterfly to emerge, it can be seen flying along hedgerows throughout most of the UK.

Here in Cornwall the season starts earlier than most of the country due to the warmer climate and in the last two weeks we have seen many Holly Blues flying along the hedgerows and woodland edges. We were lucky in having this male (above right) settle low down on Bramble (Rubus fruticosus agg.) to sip aphid honeydew with its wings open. So often they will only settle high up amongst Ivy (Hedera helix) and Holly (Ilex aquifolium) trees with their wings tightly closed.

Although a common butterfly in the UK, with it’s range increasing northwards towards Scotland, it’s numbers do fluctuate widely. Climate and the parasitic wasp Listrodomus nycthemerus, which preys on the caterpillars, are thought to be the cause of such population changes. Maybe the recent severe winters have killed more parasitic wasps and resulted in more Holly Blue larvae surviving.

The females are best identified from the males by having darker borders to the outer edge of the forewing – although the butterflies frustratingly often sit with their wings closed.