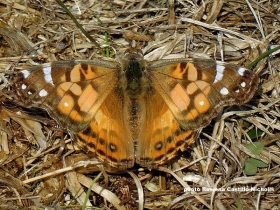 This American Painted Lady butterfly, Vanessa virginiensis, a very rare butterfly for the UK, was recorded and photographed by Rowena Castillo-Nicholls and husband Rob at Nare Head on the Roseland Peninsula in Cornwall on the 20th September.

Rowena is a trustee of the Cornwall Butterfly and Moth Society, and fellow trustee Lee Slaughter identified the species from a photo seen the next day.

As few as 100 records have ever been recorded in the Uk and this is the first Cornish record since the only other record in 1876.

The similar Painted Lady butterfly, Vanessa cardui, is one of the most adventurous migratory butterflies. In most years it arrives in variable numbers from Southern Europe and North Africa to Cornwall and other southern regions of the UK. 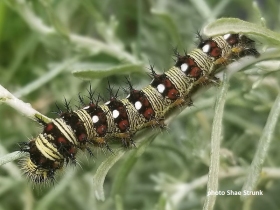 As with most rare butterflies turning up unexpectantly their origins are likely to remain tantalisingly uncertain and provoke much healthy debate!

A resident population of American Painted Lady butterflies occur in the Canary Islands on the Island of Tenerife with occasional migrants appearing in Spain, Portugal and sparadically further north.

In North America the species is known as The American Lady and is also a migrant. However, sightings of the butterflies and their larvae are so regular and numerous in many states it could easily be mistaken for a resident species. The featured image of the striking caterpillar was received from Shae Strunk in Ohio, US on a bed of rosemary.