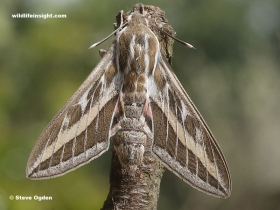 The last week has seen a large number of magnificent Striped Hawkmoths, Hyles livornica, arrive in the Uk.

Assisted by favourable southerly winds blowing in from the continent these fabulous moths first arrived along the south coast and are now spreading further north.

Cornwall has seen particularly large numbers and the Striped Hawkmoth featured was one of several attracted to light and seen nectaring at Red Campion in a Falmouth garden.

Hopefully this early influx will result in the caterpillars being found later in the year.

Other Hawkmoths are featured in the Hawkmoth gallery.

Hawkmoth caterpillars (larvae) are featured in the caterpillar galleries