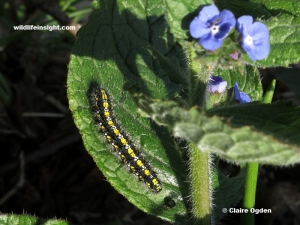 Hopes are high for the stunning sight of large numbers of brightly coloured Scarlet Tiger Moths later in the summer.

This species is prone to sudden explosions in numbers and the many recent reports of their caterpillars from the southern half of the UK suggest this may be one of those eruption years.

And last weekend at Tuckingmill in West Cornwall we also saw several on Green Alkanet. Other reliable sites in past years for this species in South West Cornwall have been along the Atlantic coast at Polly Joke and the extensive Penhale Sand dunes.

Other Tiger moth species featured in the species pages and galleries are – The Garden Tiger, Cream-spot Tiger, Ruby Tiger and Jersey Tiger.