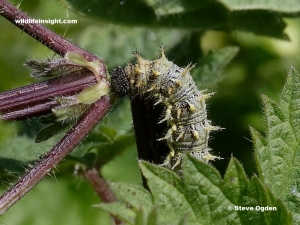 Red Admiral caterpillars have been busy over the last few weeks constructing their nettle tents in our Cornish garden.

Several are fully grown now and it was fascinating to watch a pale form of the caterpillar construct its final nettle tent by biting through the main stem.

Once the almost severed stem had keeled over it then walked down it to the tip and stitched three leaves together to form an enclosed tent.

The fully grown caterpillar is likely to pupate inside this nettle structure within the next week or so.

The eggs that produced this brood were likely to have been laid at least six weeks ago, possibly by the Red Admirals seen in the garden in mid January.

Finding a Red Admiral as either a butterfly, caterpillar or chrysalis during the colder winter months is becoming increasing more frequent in the mildest parts of South West Cornwall.

Other butterflies that lay eggs on nettles in gardens are The Peacock, The Small Tortoiseshell, The Comma and occasionally the Painted Lady.

Many species of moth also lay eggs on nettles. Three of the most common are The Snout, The Silver Y and The Angle Shades Moth.