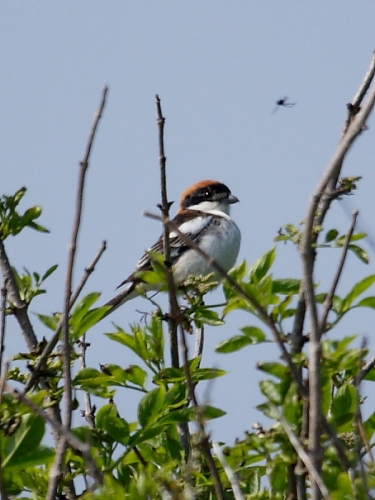 Springtime in Cornwall brings with it the chance to see rare tropical migrant birds such as this male Woodchat Shrike. It was busily feeding on beetles and other insects on the edge of a grass field at Treen, near Land’s End.

It always strikes us, whenever we have the opportunity to watch shrikes in this country, that they always seem to find plenty to eat which raises the hope that one day they may successfully establish breeding populations in the UK.

As it happens another Woodchat Shrike was in a field close to this bird but, unfortunately, it too was a male.

Insight into Woodchat Shrike (Lanius senator): Shrikes are often referred to as Butcher Birds after their habit of impaling their prey on barbed wire fences.

Following recent attempts of Red-backed Shrike to breed in the country once again, it is hoped that other shrike species such as the Woodchat Shrike may one day also breed.