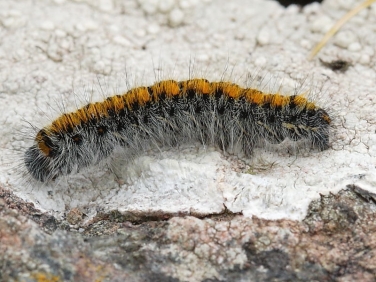 This caterpillar was seen sunning itself at Kynance Cove on The Lizard in Cornwall.

Insight into Grass Eggar (Lasiocampa trifolii): a red data book species found mainly in southern coastal areas of England and Wales but with a small population also in the north west.

The moths have a varied diet of vegetation according to whether they are found on lightly vegetated sand dunes, sea cliffs or Dorset heathland.

Life-cycle: over-wintering as an egg, the caterpillar is fully grown by late July when it pupates in a tough brown cocoon on the ground. The adults fly between August and September.