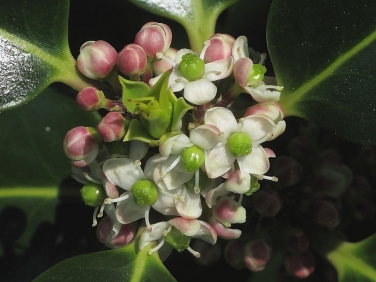 Most people are familiar with red Holly berries, especially at Christmas, and we learn fairly early on that Holly leaves are prickly but I wonder if, like me, you haven’t ever thought about the Holly flowers?

The trouble is they’re quite small, only 6mm across, and tucked in close to the stem, hidden by the glossy evergreen leaves so they don’t get noticed. Shame really because they’re rather pretty!

Insight into Holly (Ilex aquifolium): Individual Holly trees produce only female (as shown) or male flowers. This is known as ‘dioecious‘ from the Greek meaning ‘two households’.