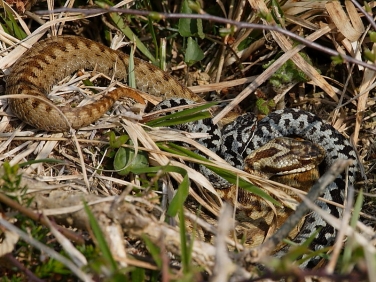 Adders seem to be everwhere we go in Cornwall at the moment – see Is this the Most Southerly Snake in Britain? post a little over a week ago.

This pair were curled up amongst the heather at Kynance Cove on The Lizard. I nearly stepped on a female basking in the sun on a track at Windmill Farm Nature Reserve and a female, much to the alarm of a holiday-maker, was on the cliff path at Godrevy Point.

For a species reported to be in serious decline nationally there certainly seem to be plenty of the UK’s only poisonous snake in this part of Cornwall.

Insight into Adder (Vipera berus): The female Adder or Viper is brown and much larger than the lighter coloured male but both have the zigzag pattern running down the full length of their backs. In order to warm up these cold-blooded reptiles are often found early in the morning curled up on paths and even quiet tarmac roads which absorb the heat of the sun.