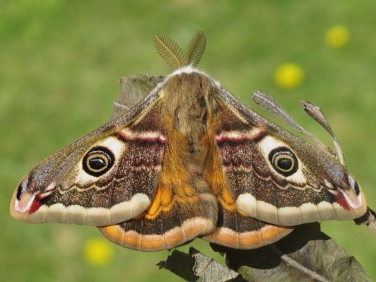 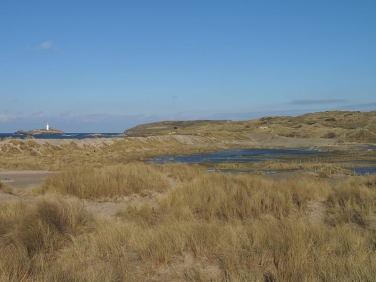 Emperor Moths are on the wing again and yesterday afternoon we saw our first male of the year flying quickly over bramble at St Gothian Sands Local Nature Reserve on the North Cornwall Coast.

Insight: Emperor Moth (Saturnia pavonia) males fly during the day using their combed antennae to smell the pheromones given off by nocturnal females. Once located many males may find a single virgin female but only one will succeed in mating with her. Once she has been mated the female will cease giving off pheromones and males will lose interest in her. Click on the Emperor Moth video below to see this:

The females are much larger than males and are attracted to light at night. They are well distributed throughout the UK in suitable habit such as moors and open country. The caterpillars, which feed on a variety of plants such as heather and bramble, start life black but by the time they reach their final instar, at 65mm long, they are a brilliant green with dark hoops.