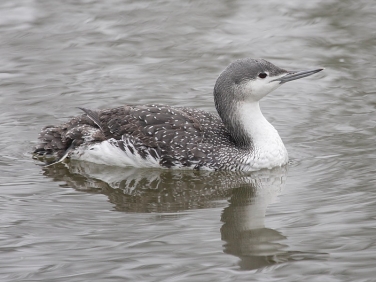 This Red-throated Diver has been finding the fishing easy in St Andrew’s Pool near St Austell for several days now. The resident Roach population will no doubt be pleased to see it leave for its summer northern breeding quarters.

It’s breeding range extends from the Arctic tundra as far south as north-west Scotland and Ireland. During the winter it migrates south and may be seen around the UK coastline in estuaries and open sea, occasionally turning up on inland waters.

It derives its name from the distinctive deep red throat patch it acquires in summer. Also called Loons in Shetland, these birds are considered to be a reliable indicator of weather: short cries for fine weather or long mournful cries which eerily carry across the lochs for bad weather.