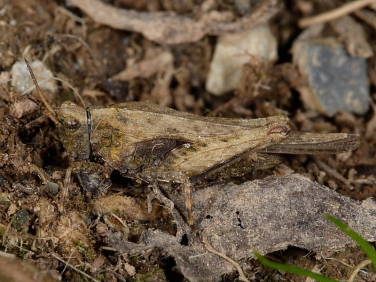 This Slender Groundhopper was disturbed from grass during a cliff top walk around Rosemullion Head at the mouth of the Helford Estuary in Cornwall. That’s when the fun began!

The groundhopper is small, well camouflaged and fast so getting a photograph in the field is quite a performance.

Add in that the groundhopper likes to hide in the bottom of grasses and then hop a good 30cm when you’re not looking and you get an idea of what a mug’s game nature photography can be!

Insight: The Slender Groundhopper (Tetrix subulata), one of only three species of Groundhoppers to be found in the Midlands and Southern regions of the UK, is fairly common in damp undisturbed grassland or on bare ground.

It is between 9 and 14mm in length and can be found at anytime of the year, capable of over-wintering as either a nymph or an adult. Easily identified from the Common Groundhopper (Tetrix undulata) by its extended wings, it is more difficult to seperate from the much rarer Cepero’s Groundhopper (Tetrix ceperoi) unless you measure between the eyes!