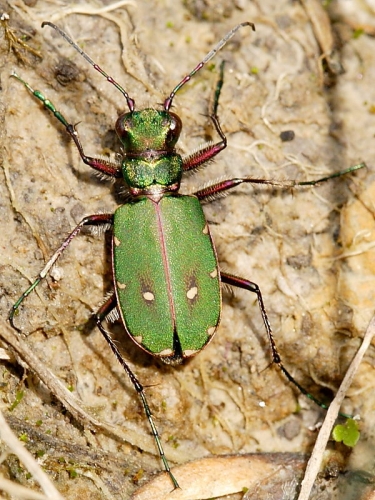 A smart male Common Redstart was the pick of the bird migrants at Windmill Farm yesterday morning but proved extremely camera shy. However, the Green Tiger Beetles active on the banks around one of the ponds were far more accommodating.

Insight: Of the five UK Tiger Beetles, the Green Tiger Beetle is the most common. They can often be seen on sunny open ground, scurrying over bare patches of soil in between vegetation, looking for prey such as spiders, caterpillars and other insects.

As adults they are about 1.5cms long and are voracious predators with big jaws. Their larvae are also predatory and lie in excavated holes ready to sieze any unsuspecting passing insect.