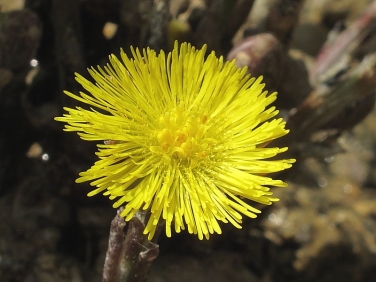 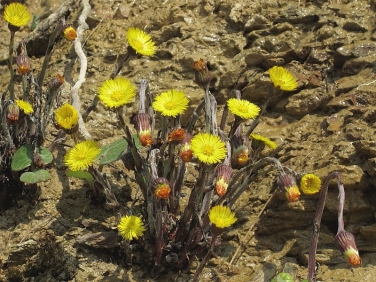 These bright yellow Colt’s-foot were flowering in the eroding cliffs of Godrevy Towans at the north end of St Ives Bay in Cornwall.

Insight: Colt’s-foot (Tussilago farfara) flowers from March to April, the flowers appearing long before the leaves. It’s named after the shape of the leaf that resembles a colt’s foot.

The plant has been used medicinally as a cough suppressant, Nicolas Culpeper saying “The fresh leaves, or juice, or a syrup made thereof, is good for a hot dry cough“. The leaves have also been used as a tobacco which probably gives rise to the need for a cough suppressant!

The roots may be toxic.