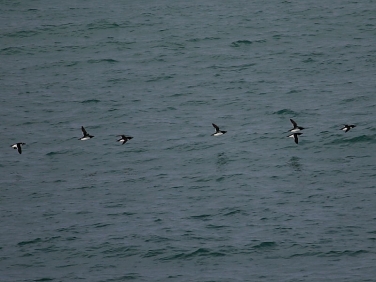 Flocks of sea birds including Razorbill, Guillemot, Gannet, Cormorant, Shag and various Gull were feeding on shoals of fish on the sea beyond Godrevy Lighthouse.

Insight: Razorbill (Alca torda), a member of the Auk family, is common around most of the UK coastline but only comes ashore to breed on steep cliffs in the summer, spending the winters in the North Atlantic. Although the bill is much deeper and blunter than the pointed bill of the similar Guillemot, this identyfing feature is not always clear when seen at distance.

According to the BTO ringing report, the oldest known Razorbill was caught by a ringer 41years 11months and 23 days after it was ringed as a nestling in 1962. Both events on Bardsey Island off north Wales.