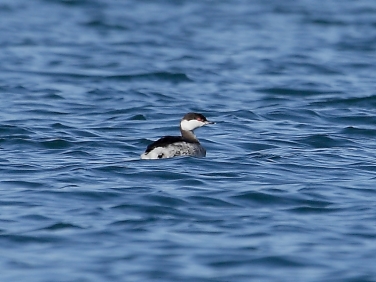 A distant shot of the Slavonian Grebe that has been in the Carnsew Basin for the last few days. A record shot was better than nothing as so often these winter visiting birds appear as a distant speck out to sea.

Insight: Also known as Horned Grebe after the golden ear tufts of the male in summer plumage. It is estimated that less than 50 pairs breed in Scotland but there have been recent attempts to breed further South. Several hundred may be recorded around the shores of the British Isles each winter.