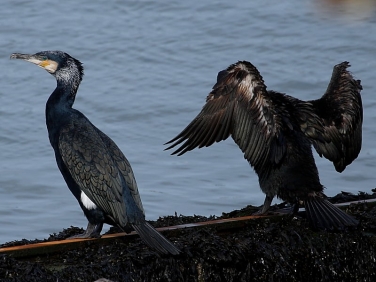 One adult Cormorant showing off a fine white thigh patch and another wishing he hadn’t got too close to a trout fisherman!

Insight: A very common bird both on freshwater and around the coast of the British Isles. The adult birds have a white thigh patch during the early part of the breeding season. Over the centuries their fishing ability has brought them into conflict with the fishing industry and sea fishermen were once paid for every Cormorant killed. However, where as they are now no longer seen as a threat to sea fish stocks, the influx of Cormorants inland onto freshwater commercial fisheries in recent years has brought them into conflict with anglers.