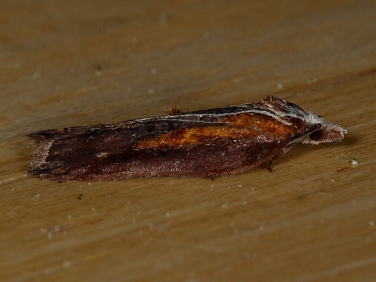 More in hope than expectation the 15 watt actinic light was left to run for the first time overnight. A single Acleris cristana was the only moth but at least it’s a start.

Insight: Acleris cristana is a micro moth with a wingspan of 18-22mm and a variable pattern. It’s concaved wings and strange tuft of scales in the centre of its wings help identification.

It hibernates over winter and so is one of the first moths that can be recorded early in the year during mild weather. ‘Crista’ refers to the scientific name for tuft. It is also known as Rufous-margined Button Moth.