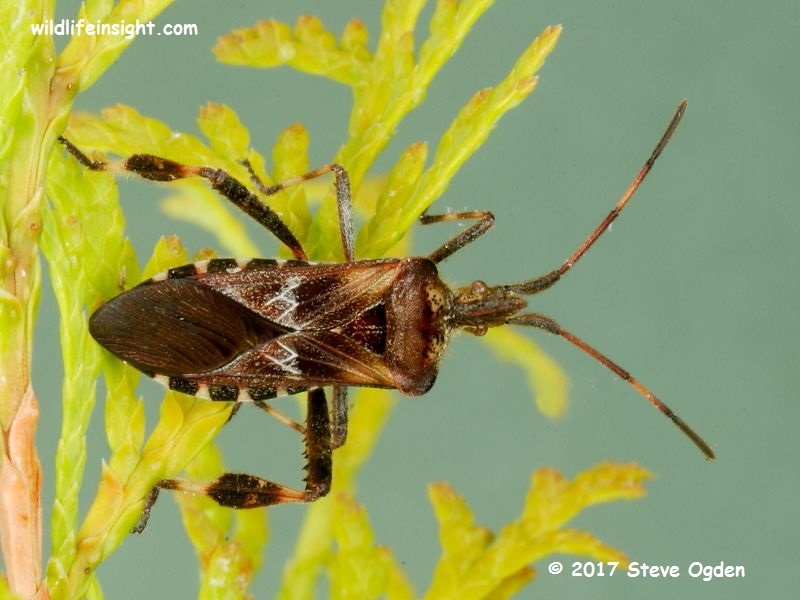 The recent southerly winds off the continent brought an unusual insect to the garden.

A Western Conifer Seed Bug was found on a wall close to a light trap set to attract migratory moths.

A recent UK colonist it may now be resident in this part of Cornwall.

However, it seems likely that this one was a migrant, given the wind direction and large numbers of migratory moths attracted to the light.

2151 sightings and identification enquiries have already been received for 2017.

In recent weeks the most frequently received caterpillar sightings have been of the Pale Tussock Moth, Dot Moth, Fox Moth and The Drinker Moth. Of particular interest have been several Goat moth caterpillars and Convolvulus, Spurge and Death’s Head Hawkmoth caterpillars from Europe and the UK.

From the US and Canada there have been several different species of Sphinx, Tiger Moth, Tussock Moth, Dagger Moth, Swallowtail Butterfly as well as unusually large number of prepupating White Blotched Heterocampa caterpillars.

An amazing stinging Flannel Moth caterpillar enquiry was received from Andrew Schechtman in a Peruvian Rain Forest. Not yet identified but seems to have the characteristics of a Megalopygidea species, except much, much larger than the North American Asp (Puss Moth)!!! Hope to feature this creature on the site soon.