This sighting of a splendid Striped Hawk-moth caterpillar (Hyles livornica) came about thanks to an identification enquiry received from Gareth Marshall who was holidaying on the Roseland Peninsular in Cornwall.

It’s the first time I’ve ever been on a caterpillar twitch but felt it worth a try as migrant Striped Hawk-moth caterpillars are not commonly found in the UK.

Although, following an unusually large influx of these migrant hawk-moths in June, the chances of someone coming across their caterpillars in Cornwall this summer had improved significantly. 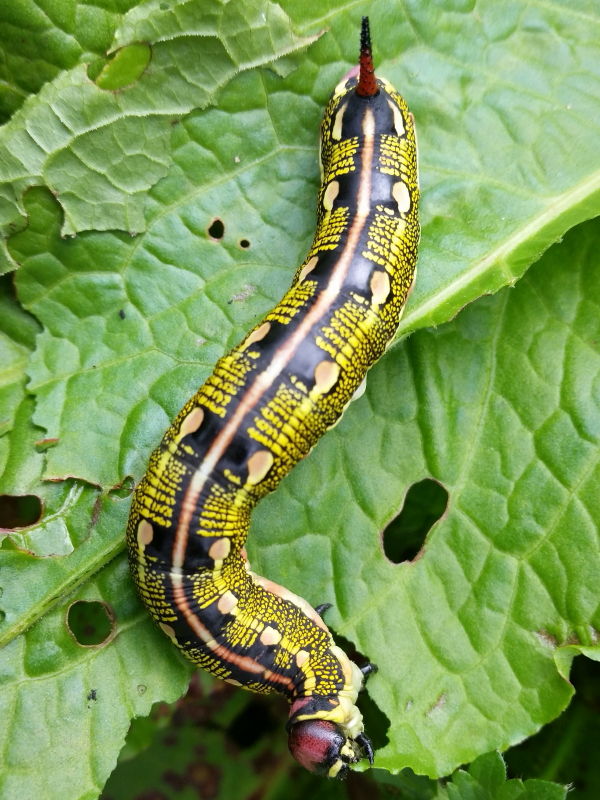 When we set off we were only to aware how remote the chances were of finding even a distinctively marked 100 mm long caterpillar in a field.

Thankfully, Gareth’s precise directions took us directly to the field and the dock plant it had been seen on – there really was no other plant it could have been on, with the feeding signs clearly evident.

Unfortunately there was no immediate sign of it on top of the leaves where Gareth had photographed it.

And following a thorough but unsuccessful inspection of the underside of every dock leaf an intensive search of the surrounding grass then began.

The sight of a grown man bent face down on hands and knees in a middle of a field frantically searching through the grass must have looked odd to the two walkers that passed by.

Thankfully, all proved worthwhile when the stunning caterpillar was eventually found within a couple of metres of the dock deep down in the grass – possibly seeking out somewhere to pupate.

Our thanks go to Gareth for a chance to see this magnificent caterpillar and the use of his photo shown left.

To compare it with other large caterpillars see the moth caterpillar gallery.