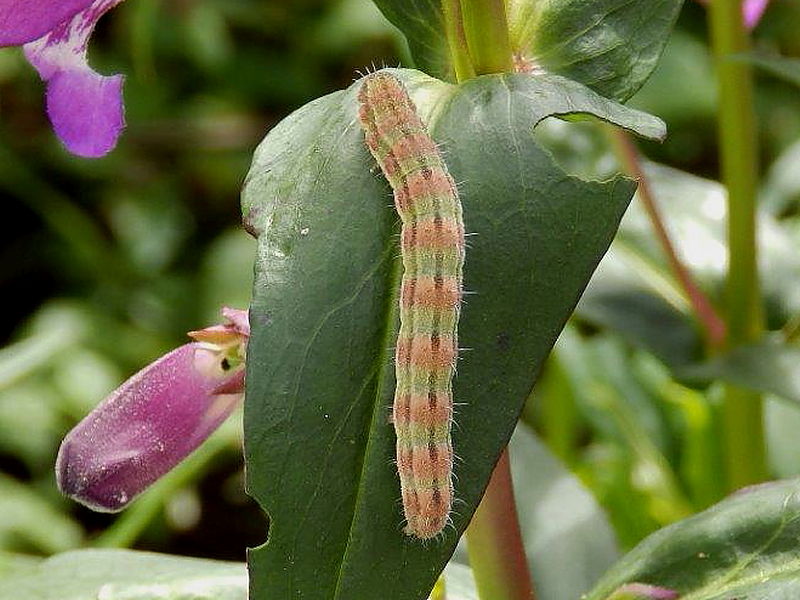 Recent sightings suggest that the caterpillars from the influx of migrant Bordered Straws (Heliothis peltigera) earlier in the year are now chomping through garden dahlias, petunias and penstemons in parts of the southern half of the country.

Jeff Farley enquired about caterpillars eating his wife’s penstemons in their garden in Chard, Somerset. Jeff’s photos show both the green and pink banded forms of Bordered Straw caterpillars.

The caterpillars have also been recorded feeding on other cultivated garden flowers in the south west.

Thanks go to Jeff for his record – pity about his wife’s penstemons!

Bordered Straw migration to the UK

During the influx into Cornwall and the south west towards the end of May/early June there were significant double figure counts seen during the day nectaring on flowers as well as many attracted to light at night.

This influx had been predicted due to huge numbers being reported in the south of Spain and North Africa earlier in the year. It seems likely that the offspring of these were assisted by favourable southerly winds to bring them to the UK.

A tiny 5 mm green caterpillar found on fleabane on The Lizard, Cornwall that I’ve been rearing through to identify has also turned out to be a Bordered Straw caterpillar.