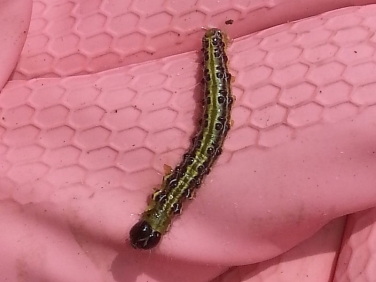 Amongst several recent records of Brown-tail caterpillars was an enquiry about another ‘problem’ caterpillar.

Although, this time, one notorious for its eating habits rather than its ‘itchy’ hairs.

These photos were taken by Gillian Caw in her garden on the outskirts of Paris.

Nicole Lepertel, a French lepidopterist who in the past I’ve been pleased to help out with moth images, immediately identified them as the caterpillars of the Pyralid moth Cydalima perspectalis and also know as box caterpillars. 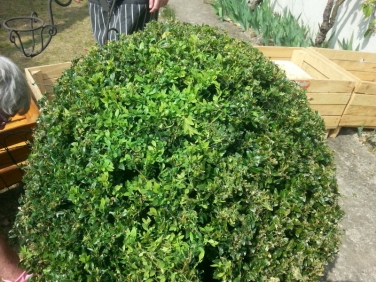 In Europe the caterpillars are considered a pest for defoliating Boxwood bushes – shown right.

In the UK the moths are a rare migrant, which given our close proximity to France seems surprising.

A species that can be a pest in one country and yet very rare in another, separated only by a few miles of water, suggests they aren’t the best fliers.

Anyway, Gillian, thank you for the use of your images and sorry about your Boxwood bushes. I only wish the caterpillars were in my garden here in Cornwall and not yours!

Maybe, with favourable migratory winds, I’ll be able to add an image of the adult moth to the site soon.

Thanks to Gillian and Nicole.