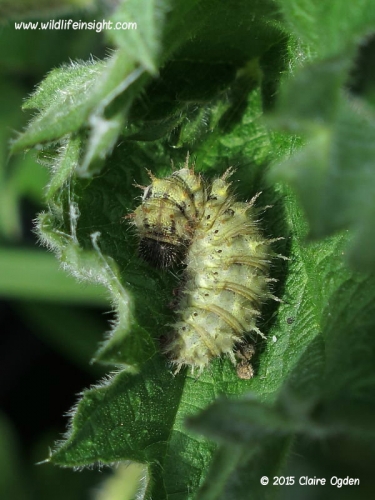 On the 9th April, 15 over wintered migrant Red Admiral caterpillars were found at a coastal location on the Lizard Peninsular, Cornwall.

Although unusual to find the caterpillars of a migrant species at this time of year it wasn’t entirely unexpected.

Over the winter in south west Cornwall Red Admirals have been recorded not just hibernating but flying in every month.

Due to the development time the eggs of this brood couldn’t have been laid later than February suggesting that either some of the surviving over wintering butterflies had also bred or the development of eggs/caterpillars of earlier broods had been extended over several months.

The caterpillars were mostly fully grown but did include a second instar and a chrysalis wrapped inside a nettle tent. Some were feeding openly outside their tents and there was an unusually large proportion of pale forms. In order to minimise disturbance only two ‘tents were fully opened to obtain photographs.

They were found on a single, tiny patch of nettles in a sheltered coastal spot.

Most commonly enquired about caterpillar in recent days has been the Scarlet Tiger Moth – suggesting this may be one of those eruption years!

Latest on butterflies in SW Cornwall

Over wintering butterflies such as Peacock, Small Tortoiseshell and Comma all seem to have done well. High numbers of Holly Blues and 4 Painted Ladies have also been reported.