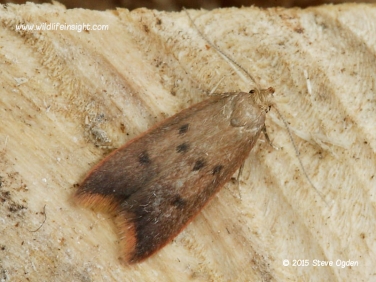 One moth I hadn’t anticipated recording during the winter was the micro Tachystola acroxantha.

This adventive species is thought to have been accidentally introduced into Devon on plants imported from Australia in the early 20 century.

Now it is a fairly common species here in Cornwall and is regularly attracted to the garden moth trap between April and October.

Fortunately, given its modest 7mm forewing length, it is an easily recognisable moth with three black spots and an orange trim to the outer edge of its forewing.

This one appeared on the inside of the lounge front window after bringing in some logs from outside.

This unusual date raises the possibility that Tachystola acroxantha is overwintering as an adult in Cornwall.