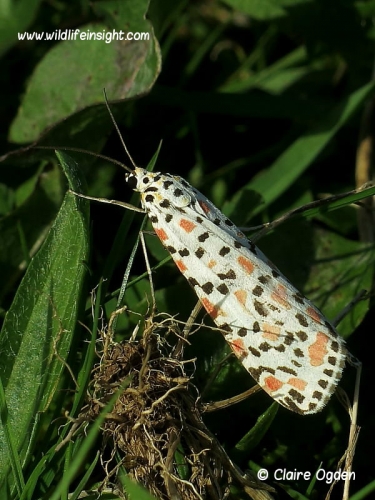 At the weekend during a search for the caterpillars of migrant Clouded Yellow Butterflies in fields beside the Helford Estuary we had a most unexpected surprise!

My wife disturbed and identified one of the most colourful and rarest migrants moths to be seen in the British Isles, a Crimson Speckled Moth, Utetheisa pulchella.

This one was a large specimen which in flight could have been confused with a Small White Butterfly .

Fortunately the flight pattern suggested something else and having caught up with it and seeing it settled there was no confusing it.

Normally seeing 6 Clouded Yellow Butterflies and a Red Admiral Butterfly on such a late date would have been the highlight – but not on this occasion!

More information and photos can be seen on Crimson Speckled