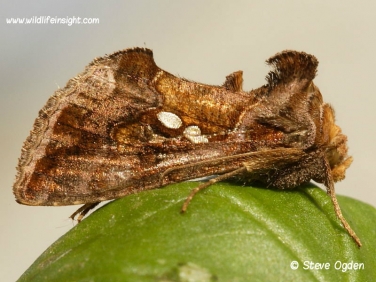 Southerly winds have brought some rare moths to many parts of the Uk in recent days and in particular to south west Cornwall.

Commonly found in North Africa and southern Europe this one took advantage of the favourable winds to make the flight across the channel.

The eggs laid will be reared through to obtain a complete photographic record of the early life cycle stages. However, due to it not being a native species any adult moths emerging will not be released. 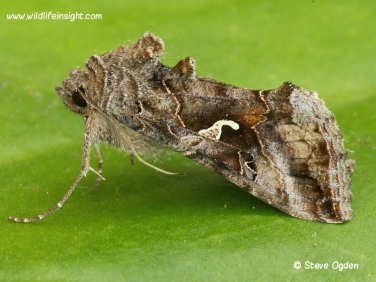 Of the other similar moths in the Plusiinae family found in the British Isles the Silver Y is the commonest migrant.

The unbroken ‘silver Y ‘ as clearly seen in the specimen shown right is usually sufficiently clear to determine this species from other rarer moths arriving.

The rare Tunbridge Wells Gem, Chrysodeixis acuta is probably the most likely species to be confused with the Golden Twin-spot.

Thanks to John for the record