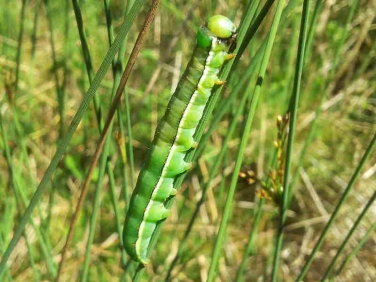 Two interesting images of the Red Sword – grass caterpillar were received in June.

Helen Sly recorded a Red Sword-grass caterpillar in the RSPB Arne reserve in Dorset while Mark Jones took the photo shown right of one found by his friend Martin in the Forest of Dean, Gloucestershire.

Both were of a fully grown green form of the caterpillar and both photos show clearly the black outlined oranges spiracles which help identify this species.

The adult Red Sword-grass moth is an extraordinarily cryptic species and one not likely to be either seen or noticed unless attracted to light or sugaring.

Many thanks to both Mark and Helen for sending in their images.