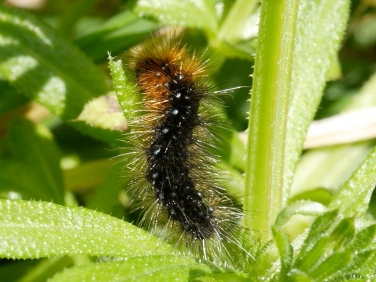 Over wintering caterpillars such as Oak Eggar, Drinker, Garden Tiger and Fox Moth are some of the hairy caterpillars seen in the last few days in various coastal sites here in the far south west of Cornwall.

These early post-hibernating caterpillars seem to take a while to warm up and spend much of their time sunning themselves on the tops of low lying vegetation.

The mid-instar Garden Tiger caterpillar pictured right was an exception as it fed hungrily on Bedstraw in the Cot Valley. 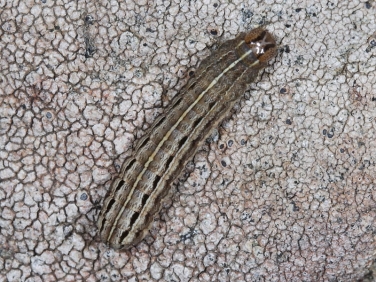 On some grassy cliff tops near Kynance Cove on the Lizard a search beneath the matted dead grasses revealed several other comparatively hairless species of caterpillars.

Some were very small and the identity uncertain but were thought to be species of Wainscot.

Striped and Smokey Wainscot in various instars seemed likely but to be sure they will have to be reared through.

More hairy caterpillars can be seen in the British caterpillar gallery